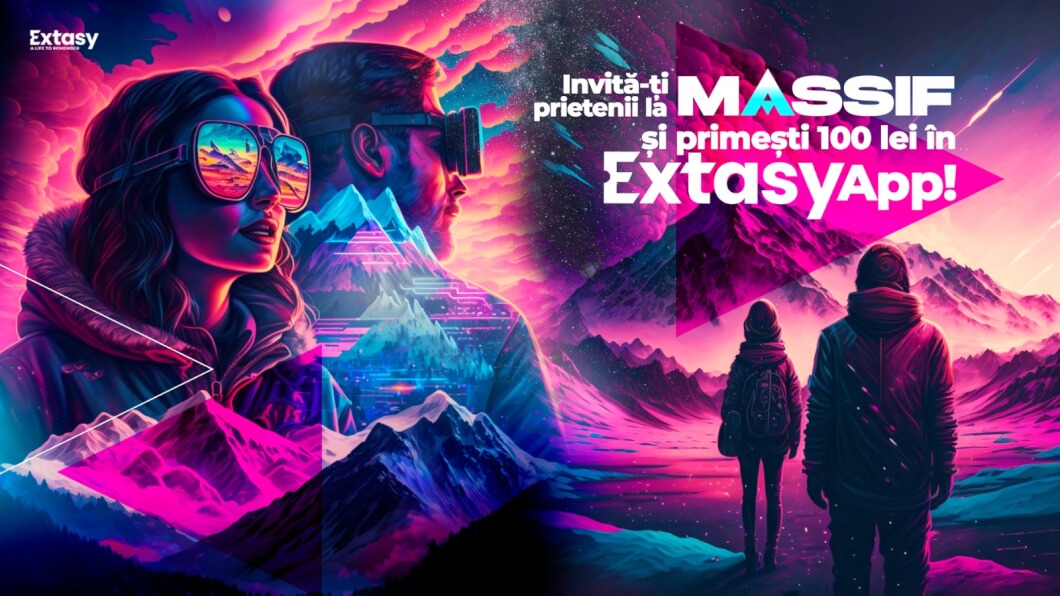 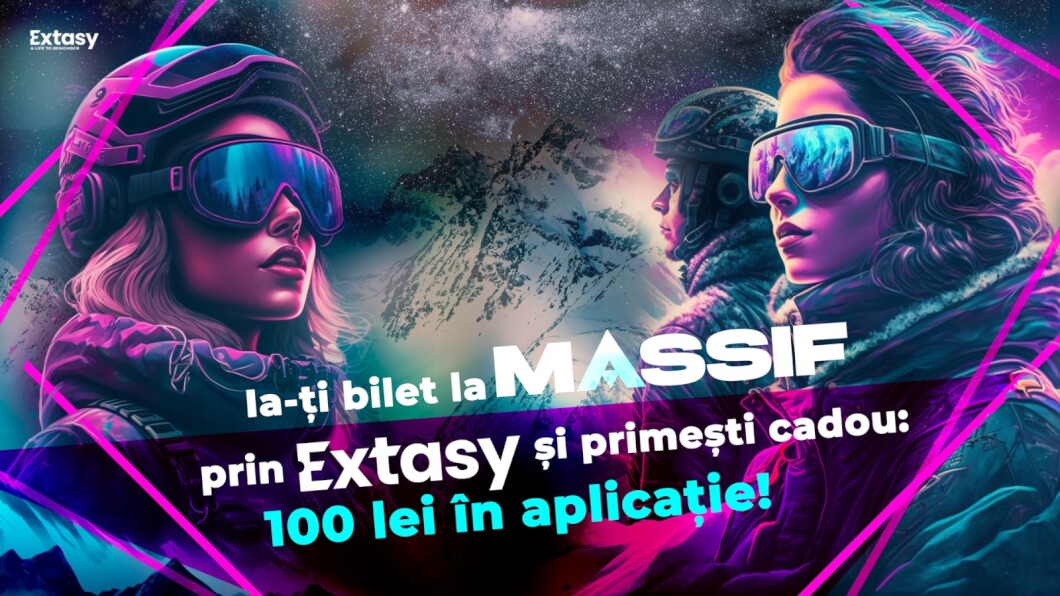 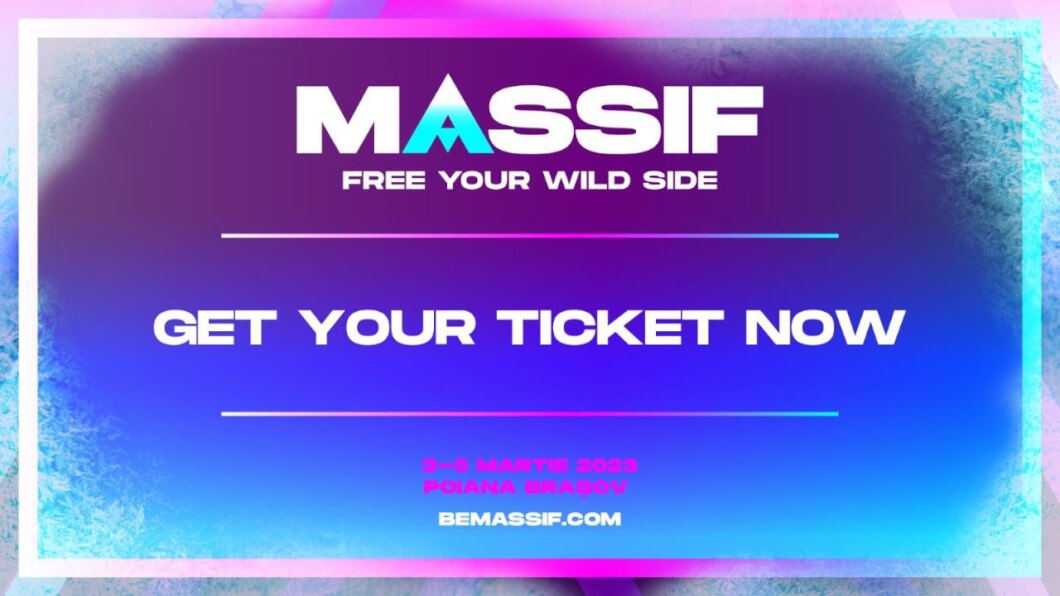 IT’S GONNA BE THE WILDEST PARTY WITH YOUR FRIENDS!

Massif is a unique and exclusive experience for this part of Europe, a full takeover, tailored specifically for the beautiful Poiana Brasov mountain resort.

Join us for 3 stages:
Massif Main Stage
FIRE & ICE, all at once! The heart of Massif with the wildest music from your fav international and local artists & DJs! Not to be missed.

G.O.A.T. Stage aka Greatest Of All Times Stage.
The most unexpected of all! A wild mix of music in an indoor thematic venue with diverse food & beverage offerings.

4 on the slopes stages, where you’ll be surprised again :

Artists that will make you go wild!

So many fun activities & winter sports for the bravest!

IN THE END IT’S ALL ABOUT DRINKING, GETTING LOST FROM YOUR FRIENDS, GETTING BACK TO THEM, 5 TIMES/ DAY.

I. PREAMBLE
The campaign "Order in instalments tickets to the Massif Festival, 2023 edition" which will take place on March 3-5, 2023 (hereinafter "the Festival"), is organized by MASSIF ESTATE SRL, a Romanian legal entity, with registered office in Cluj Napoca, General Eremia Grigorescu Street 122A, Cluj County, with Fiscal Code RO45318331, registered at the Trade Register under no. J12/5924/2021, IBAN Account no. RO29BTRLRONCRT0628906201, opened at Banca Transilvania Bank, represented by Sebastian Ferenț, as Administrator, and applies to persons (hereinafter "Customer") who:
- hold a valid account in the "Extasy" application or Extasy platform;
- pay the price of the Festival pass (hereinafter referred to as "ticket"), in instalments, via the Extasy App or on the website www.extasy.com, online, with a bank card;
At the time of entry you accept sole responsibility for deciding whether your participation is legal under any jurisdiction applicable to you. By entering the Campaign, you agree to these Rules and to the fact that the decisions of the Organizer are final and binding with respect to the Campaign.
Online payment by bank card is the easiest and quickest method of payment, which is why Customers who are holders of a credit or debit card of any kind (e.g. VISA, Mastercard) can purchase a ticket/tickets for participation on the Festival, with payment to be made in maximum four instalments as follows.
These Regulations contain the provisions that each Customer undertakes to observe and to which he/she declares his/her agreement.
The Rules are available free of charge to any Customer in the Extasy App and on the website www.extasy.com.

II. RIGHT OF PARTICIPATION
Any natural or legal person, resident in Romania, with full legal capacity, who purchases a ticket/tickets during the period mentioned below, within the limits of the available stock of the Organizer, may participate in this campaign.

Once the order has been placed, each person will receive a confirmation email.
Extasy will attempt to debit your account with the price of the instalments according to the terms mentioned above. If it is not possible to debit your account, for any reason and for any payment instalment, the ticket will not be considered as purchased and Extasy will cancel it from the system, so you will not be allowed access to the Festival.
It is your responsibility to make sure that you have the amount of each payment instalment in your account, so that the payment can be made successfully and on time.
Thus, by ordering your ticket(s) you agree to the automatic debiting of your account by Extasy with the price of the ticket(s) ordered! Withdrawals will be made from your card, with which you registered in the Extasy App or on the website www.extasy.com.
The delivery of the ticket(s) ordered and paid for will be made online on the Customer’s account in the Extasy App/Extasy website.
In the event of failure to withdraw the amount of the ordered ticket(s) from the Customer's card, the ordered ticket(s) will not be considered as purchased.


V. GENERAL CONDITIONS
The Organizer reserves the right, in its absolute discretion, to disqualify any person who tampers with the registration or operation of the Campaign, who violates these Rules, who acts in an unethical or disruptive manner, or who is determined to be acting with intent to disturb, abuse, threaten or harass any person. The use of fraudulent methods of entering the Campaign in any manner will result in the cancellation of all registrations by such methods, and persons using such methods will be disqualified. If, for any reason, this Campaign is not capable of running as planned due to causes beyond the control of the Organizer/Extasy, fraud, technical problems, or any other causes which, in the opinion of the Organizer/Extasy, corrupt or affect the administration, security, fairness, integrity or proper conduct of the Campaign, the Organizer reserves the right to cancel, terminate, modify or suspend the Campaign. In the event that the Campaign is terminated due to force majeure, fraud or technical difficulties before the end of the Campaign Period, an official announcement will be made.

VI. LIMITATION OF LIABILITY
In no event will the Organizer be responsible or liable for any damages or losses of any kind, including direct, indirect, incidental, consequential or punitive damages, arising out of your participation in this Campaign. Without limiting the foregoing, the products and services offered by the Organizer, including this Campaign, are offered "as is", without additional warranties, express or implied, to those which the Organizer is required by applicable law to provide.

VII. LEGISLATION AND DISPUTES
These Rules are governed by Romanian law. If one of the clauses is declared void, the other clauses will not be affected and will continue to be valid and applicable under Romanian law. Any dispute arising from these Rules shall be settled by the competent courts of the Organizer's headquarters.

VIII. FORCE MAJEURE
Force majeure is any event that cannot be controlled, remedied or foreseen by the Organizer, including the impossibility of the Organizer, for reasons beyond its control and whose occurrence determines its inability to fulfill its obligations under these Rules. If the above situation occurs or any other situation of force majeure occurs that prevents or delays the execution of the Rules or the continuation of the Campaign, the Organizer shall be exempt from liability for the fulfilment of the obligations for the period during which the fulfilment of the obligations is prevented or delayed according to the law.

IX. TERMINATION OF THE CAMPAIGN
This Campaign may be terminated in the event of force majeure or in the event of a change in the legislative framework such that the organisation and running of the Campaign requires an increase in the budget allocated to this project.

X. LEGAL BASIS
This Regulation is in accordance with the provisions of national legislation on the marketing of products and services, namely Government Ordinance no. 99/2000 and the legislation on the protection of individuals with regard to the processing of personal data and the free movement of such data. Complaints about products or services involved in the Campaign after the end of the Campaign in accordance with these Rules will not be considered and will not represent the responsibility of the Organizer. In case of attempt or fraud of the Campaign system, abuse or any facts affecting the image of the Organizer, the Organizer reserves the right to take all necessary measures to remedy the situation. The Organizer will take all necessary measures to run the Campaign in normal conditions as described above, but does not assume responsibility for complaints, disputes of participants that are not aimed at violating the legal framework in force.

Choose what best suits you from below.


You buy a ticket and we offer you 100 RON cashback in the application in the form of coins with unlimited validity.
* The purchased tickets can't be returned.
* The Check-In will be available at the festival location. No Check-In Online needed.
* Limited availability

Add an extra adrenaline rush as you enjoy the long-awaited Winter Festival, Massif!

* The purchased tickets can't be returned.
* The Check-In will be available at the festival location. No Check-In Online needed.
* Limited availability

Paragliding
We will take off from Bunloc Peak in Săcele - we need a total of approx. 60 minutes (including climb and flight preparation) with a flight time of 10-15 minutes.

You buy a ticket and we offer you 100 RON cashback in the application in the form of coins with unlimited validity.

* The purchased tickets can't be returned.
* The check-in will be available at the location
* The VIP product is dedicated to people over 18 years old
* Limited availability

Add an extra adrenaline rush as you enjoy the long-awaited Winter Festival, Massif!

* The purchased tickets can't be returned.
* The check-in will be available at the location
* The VIP product is dedicated to people over 18 years old
* Limited availability

We will take off from Bunloc Peak in Săcele - we need a total of approx. 60 minutes (including climb and flight preparation) with a flight time of 10-15 minutes.

people are born to be happy 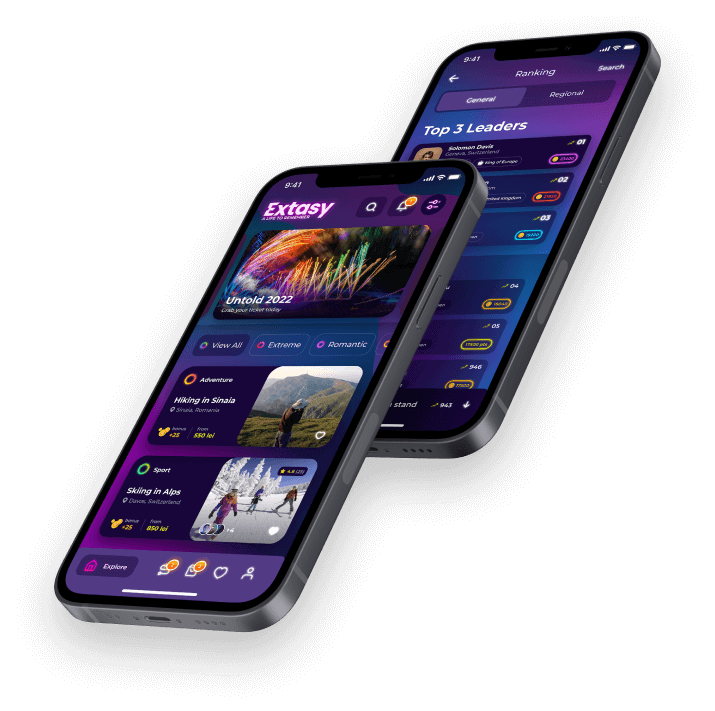